“Whenever I’m in the studio, I feel like I’m riding the crest of a giant wave,” says 50-year-old Ishmael Butler, the visionary mind behind experimental rap project Shabazz Palaces. “Making music has to be like falling in love with somebody and wanting to talk to them every second of the day. It needs to feel that fresh. If you make music you only really need passion to keep on going, and I’ve got more than enough to stay frosty.”

There’s a received wisdom in hip-hop culture that once rappers reach their forties they’re unable to stay innovative or keep up with the wave. Butler is a clear counterpoint to this ageist notion: he was 41 when the genre-blurring Shabazz Palaces released their acclaimed debut, 2011’s ‘Black Up’. Masterminded by Butler but occasionally featuring mbira player Tendai Maraire for live shows, Palaces’ work is consistently inventive and capable of transporting you to an escapist, psychedelic wonderland.

The warped chamber music of 2011 single ‘An Echo from the Hosts That Profess Infinitum’ framed Butler as a world-weary prophet attempting to make sense of an increasingly homogenised rap culture. It appeared on the opening episode of Donald Glover’s TV series Atlanta, surely proof of Butler’s enduring relevance. The dissonant ‘Yuology’, another ‘Black Up’ track, combined scrambled drums with acid-baked synths, helping to usher in a chaotic new punk rap sound currently heard in JPEGMAFIA’s music. “I make them dance just at a glance,” he boasted on 2014’s Solemn Swears’, an ode to getting so high that you feel like you’re floating through space.

These songs don’t rely on anything resembling a conventional structure; instead they exude otherworldly mystique. On Shabazz Palaces records, the Seattle rapper comes across like a slick-talking gangster from another galaxy. Butler chuckles at the thought. “I put the track on, add some sound effects and smoke some weed, and then I emerge from the smoke to rap a verse. [Funk pioneer] George Clinton used to feel like a cult leader from Venus, and that’s how I’ve always wanted to feel to people too.”

Shabazz Palaces’ quietly influential songs are a continuation of the risk-taking ethos that Butler has possessed since the early 1990s. Back then he founded Digable Planets, a socially conscious rap trio who, like A Tribe Called Quest, made art out of rapping over subtle jazz loops. But where Digable Planets were the by-product of getting stoned and goofing around with your friends, Shabazz Palaces developed a more twisted, apocalyptic sound. Butler’s lyrics are often free-flowing streams of consciousness: one moment he’s shouting out star constellations, the next questioning black identity. Yet the conflicted nature of his poetic lyrics, which mix the everyday with the profound, perfectly reflect our fragmented digital world.

“When you release rap music built around discovering new sounds, you never really know how it’s going to be received by the public,” Butler reflects during our late-night phone call. “But I like the uncertainty and the excitement of living life on the edge like that.”

This thirst for innovation continues on Shabazz Palaces’ wonderfully weird new album ‘The Don of Diamond Dreams’. The record frames him less as an eccentric rap outlier and more like a man coming to grips with his own mortality. His jazz-loving father Reginald passed away as Butler was putting the final touches together; the album is now a tribute to the man he describes as his “best friend”.

A transcendent saxophone lights up the album’s closer ‘Reg Walks By The Looking Glass’, beautifully channelling his dad’s spirit. Lyrics about “breaking through the looking glass” offer a powerful meditation on life and death. The sparkling, synth-led “Ad Ventures” is even gentler, with the lines “I ride through the light, hurtling through space” conjuring up a bombastic image of Reginald’s celestial afterlife. It’s another great Shabazz Palaces record, but one that feels a lot more human and down-to-earth than its predecessors.

For all this, though, Butler takes a spiritualistic view of his father’s death. “I’m living an alternate version of my father’s life right now,” he insists, “so he isn’t really dead and lives on through me. I am living out his dreams. ‘The Don of Diamond Dreams’ is all about exploring the idea of a cyclical, alternate reality.” Within this there are more prosaic realisations: “My dad dying made me realise you really have to pay close attention to living your life and being present, because things happen so fast and people can disappear very quickly.”

Reginald’s passing has given Butler a renewed appreciation for the people around him. His son, 24-year-old Jazz Butler, is a pioneering emo-rap musician you might know as Lil Tracy. Best friends with the late Lil Peep, Tracy spent the 2010s splicing the emotion of My Chemical Romance with the baller melancholy of Gucci Mane. A shocking number of young emo-rappers, from Peep to Juice WRLD, have tragically died from accidental drug overdoses. Butler admits there have been moments when he feared for his son.

“Lil Peep dying was definitely a wake-up call,” he says. “Remember – I knew how my son and his people were getting down. They were getting high and living on the edge. They were feeling emotional and as if nothing was worth anything. It was a direct reflection of the desolate times in our country and the world we’re living in, but it was scary for me and his mom and sisters. It was a dark period of my life. I was thinking about my son every day, praying he’d wake up. It made me and my family realise having a rich life has nothing to do with having lots of money.”

Butler is irritated by older rappers who dismiss the emo-rap scene. “When jazz first came out, the older cats thought it was too wild and wouldn’t last,” he says. “When rap came out, the older heads said it wasn’t gonna last and we all said they were stuffy. How you gonna go from being the new cat to the stuffy guy? Being caught in the past is the most frightening thing I could possibly imagine, man. Socially, musically, romantically – that’s just death to me. I don’t understand guys who came about in the boom-bap era, which was revolutionary [in the 1990s], wanting to stay there forever. That’s just wack to me. They want their sons to rap like them. It’s like, ‘C’mon, man – you sound like a dinosaur.’ 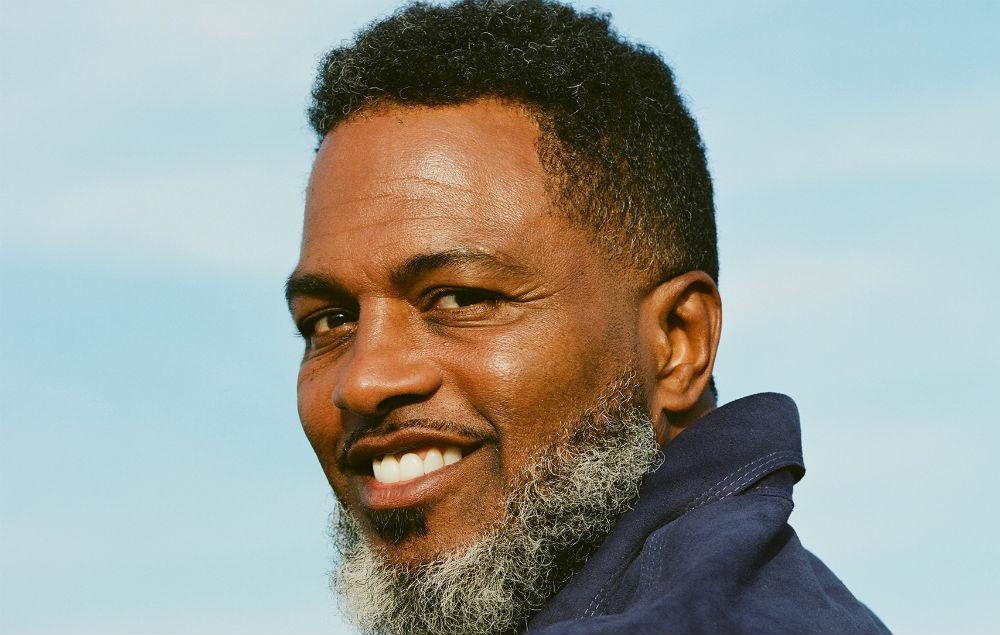 The effortless sex jam, which has clear pop sensibilities, suggests that he’s starting to soften the rough edges and has ambitions for Shabazz Palaces to cross over to a wider audience. “I definitely want to play these songs to the biggest possible audience,” he says, “and I think that’s reflected in the sound, which is just as much about making people dance as being alone with my thoughts.”

“I was thinking about my son every day, praying he’d wake up”

“That cupcake line was definitely a shout-out to Prince, man,” he explains. “’1999’ was the first record I ever bought. My mom took me to the record store and I paid for it with the allowance money I got from cutting grass. I remember opening up the record to see this picture of Prince on a bed with the sheet pulled down and his butt hanging out. He was such an individual who didn’t give a fuck. I always try to channel his rebellious spirit.”

The record’s structure was inspired by lucid dreaming; Butler used a Roland JP-8000 synthesiser to replicate the sunny sounds he heard in his dreams. On album highlight ‘Faster Learner’, the closest Shabazz Palaces has come to an R&B slow jam, Butler boasts that he looks like he “stepped out of a dream”. A profound statement dressed up as jokey self-aggrandising, it’s essentially the record’s mission statement.

“The dreams you have when you’re unconscious are very profound, and I’m really into those,” he adds. “I write them down and go back to them for inspiration, but I’m a daydreamer too. I could go into a dream right now. I really fuck with waking dreams, dreams when you’re just so high from DMT or marijuana that you come back out of the trip with new information. You could say the songs on this new album are diamonds from me mining my dreams for answers.”

Given that we’re living through the global coronavirus nightmare, daydreaming sounds like a pretty good way to escape from our current reality. Butler, who is also an A&R at Seattle’s legendary rock record label Sub Pop, believes that the traumatic pandemic will inspire a lot of great music, but also suspects it will usher in a problematic new era for the music industry.

“Fear is used to make money,” he says. “Fear is used to control people’s minds. And these are things I’m really starting to see with coronavirus.” For the first time an edge of anger creeps into his soft speaking voice. “Instead of big congregations of people [at live shows], we’re going to have a music industry where you log in and watch a performance from your home.

“Everything will be delivered to your iPhone so you don’t leave the house. I know that people are trying to capitalise on people’s fears about large gatherings as it will lower their costs. You don’t need insurance for a club night if you’ve got people watching someone’s set on Instagram, or a performer who is on a soundstage. I want to find a way of stopping that from happening because I fear the art and energy of live performances will become massively diluted by technology. These communal, escapist experiences will become too insular and there will be a generation of musicians who don’t really understand how to control a crowd.”

Looking, again, to the future, Butler says he has three new Shabazz Palaces albums “pretty much finished and ready to go”. He adds that he’d love to collaborate with artists such as JPEGMAFIA, Roc Marciano, Earl Sweatshirt and Tierra Whack and is currently working on his first film score. It’s a natural progression, given the cinematic nature of Shabazz Palaces’ music; Butler routinely makes ethereal songs that pretty much sound like a black version of Solaris.

Butler’s underlying hope is that rap fans will see what he’s doing as a 50-year-old rapper and tear down their ageism altogether. “If you cut out listening to shit just because of someone’s age,” he says, “then you’ll miss out on a lot of dope shit, you know?”

It goes back to something that Reginald, his late father, whose influence is all over ‘The Don of Diamond Dreams’, told him: “He used to say, ‘The number of years you’ve been alive are irrelevant; it’s all about how you use them’.” Ultimately, Butler concludes, “it’s not about the years. Experience is cool and everything, but you’re either alive or dead, and while you’re alive anything is possible.”