When an artist operates under a mononym, it usually suggests a star that’s larger than life; an alter ego that elevates an artist from a mere human being to some sort of god. But for 21-year-old Claud Mintz, who releases music simply as Claud, it’s quite the opposite. Their invitingly open and affably relatable bedroom pop is the musical equivalent of introducing themself on a first-name basis, showing you around their room, maybe letting you meet their pet. It’s the best way to sum up the songs they write; they’re just Claud.

At the top of this year, Mintz was in LA, beginning co-writing sessions for their first LP. The Chicago-born, NYC-based artist had already racked up enviable streaming numbers as an unsigned artist with aching singles such as ‘Wish You Were Gay’ and ‘Miss You’. Yet taking this industry-approved next step, they tell NME, they felt unsatisfied: “It really wore me out and it made me really sad, to do the LA session thing; I was so burnt out.”

So for the next few months, Mintz travelled. They spent time in Norway and in London; they hung out with friends and experienced new music scenes. At the onset of the pandemic, they returned to their father’s home in Chicago, and found that their creative spirit had returned.

“I looked at all the songs that I had written in the last year or two, and I started reworking them. Once I felt like I had narrowed it down from like, fifty songs to like, fifteen, I rented a car and drove thirteen hours back to New York,” they recount. They finished the album at the legendary Electric Lady Studios.

In October, Claud was announced as the first signing to Phoebe Bridgers’ brand new Dead Oceans imprint, Saddest Factory Records, and shared the first taste of their new music with sad-funky anthem ‘Gold’. As they get ready to announce more about their debut full-length outing, NME chatted with them about what makes Claud… well, Claud.

How did you end up signing with Saddest Factory?

“Phoebe was trying to sign me for a while – probably over a year – and it took me a while to make a decision, ‘cause I’ve always been an independent artist. But signing with Phoebe was the most exciting thing for me, because my A&R is a queer woman who is also an artist; it literally couldn’t get better than that. I felt like if anybody was going to oversee my project in the way that an A&R does, I’d want it to be an artist. I kind of surround myself with artists, and that’s just who I like to talk to and be around.”

What made you want to sign to a label at all, rather than continue independently?

“I would definitely say I was never really considering a major label. So if I was gonna sign, an indie label would be what I wanna do. And honestly, being on an indie label feels really similar to being independent. Except you have a great team, and they’re not telling you what to do, they’re just helping you with your vision. So when it came down to it, I’d been releasing by myself for like, two years, so I think I was ready just to have a team of people that believed in me as much as I do.”

Was Phoebe a major influence on you as an artist?

“When I was in college for a year I had a radio show on independent university radio. I called it Claud City. And I was so into indie rock. It started in my senior year of high school; I went to an art school, and my teacher went to school in Indiana, where Dead Oceans and Secretly Canadian started, and she introduced me to those labels. I fell in love with their artists, and I started going to house shows, and I was super into indie rock, and that was when Phoebe started putting out music. And then I just became a fan of her music. So it was sort of that whole scene that influenced me.”

You’re one of a few rising artists that are really defined as ‘Gen Z’ artists – like Clairo, Cavetown, Chloe Moriondo. Do you see a similarity or a kinship with these other artists?

“I wouldn’t say all of our music sounds the same, but I feel like people group us together, because we probably have similar humour on, like, Twitter. (Laughs) I think music listeners these days have a much broader ear, and they want to hear different sounds. They’re not just listening to a bunch of artists who make the same type of music. So I feel like naturally, we all make very different music, but in a cool way, we can still be grouped together.”

The music industry right now, especially for younger artists that have younger fanbases, is so often singles-based with it being geared towards Spotify and TikTok. When you’re writing, are you thinking that every song should sound good when it’s on its own on a Spotify playlist or in a TikTok video?

“I definitely don’t think about Spotify or TikTok when I’m writing, at all. Or after. I’ve been making music for a lot longer than that, so I never thought about that. But I also don’t think about my songs as a part of a project together either. I approach each song as like, ‘This could be a single, this could stand by itself’. So yeah, somewhere in the middle.”

You described ‘Gold’, your new single, as “kind of a roast”. It’s about the part of a relationship where you realise someone is treating you badly. What makes you want to pull from the more in-between parts of relationship in your writing, rather than writing explicitly love songs or explicitly break-up songs?

“I feel like more than I’ve been a participant of love, I’ve been an observer, starting from a really young age. My parents got divorced when I was really young, and between the two of them they have dated more people than I’ve ever seen in my life! I’ve just constantly been observing their relationships, which is a really weird experience for a child. I’ve seen people come and go in and out of my parents’ lives at such a high rate, [and] I figured out what works and doesn’t work in a relationship so early on, that when I get into my own relationships I know almost immediately if it’s gonna work or not. And I’m constantly observing and analysing, which is really bad and something I’m trying to break out of. But I think a lot of this record is me stepping out of myself and out of the relationship, and over-analysing it like I do with everything. That’s sort of where this whole record came from.” 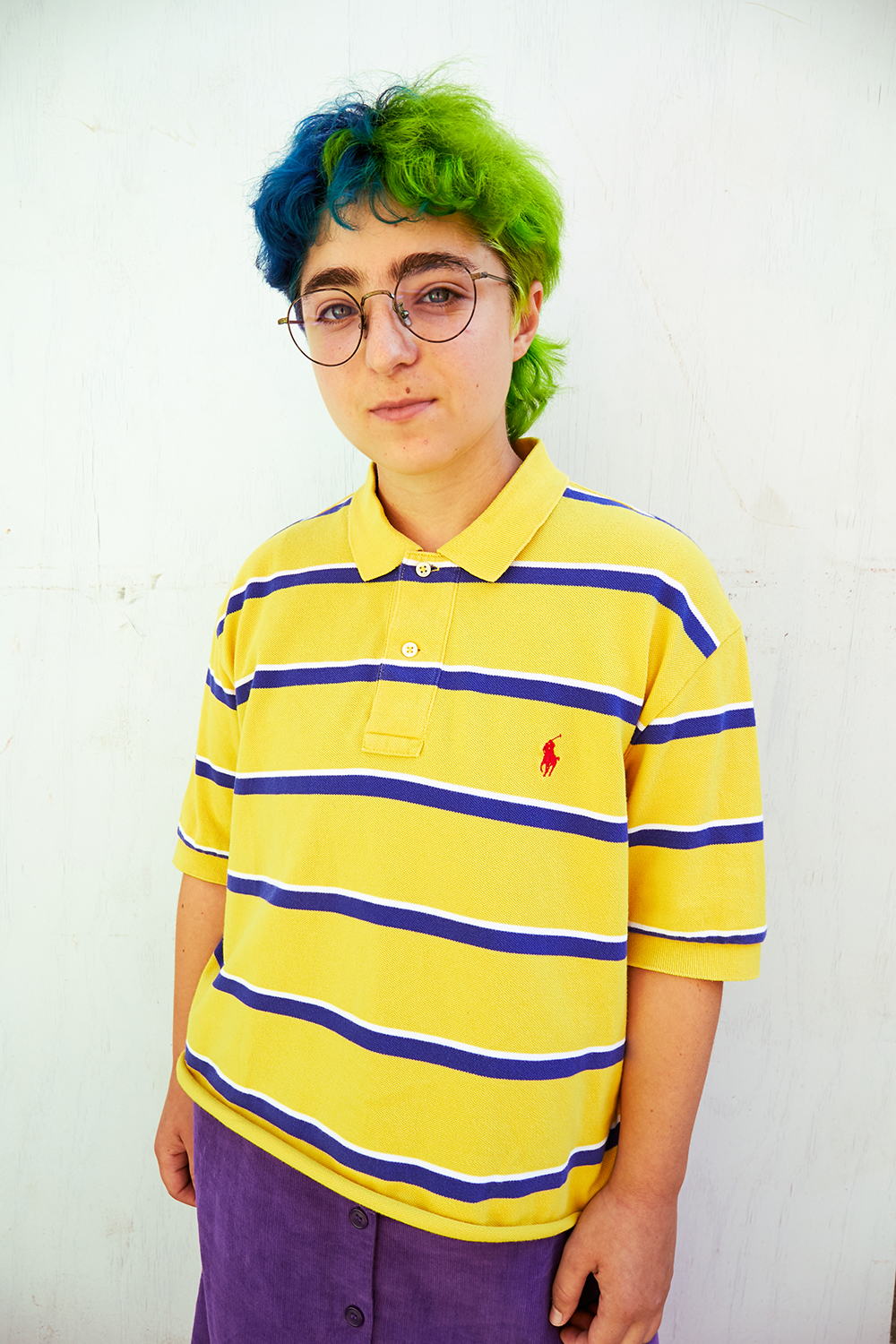 A lot of your songs feel very cinematic, like they come from a coming-of-age soundtrack. Is that something that you were pulling from?

“Yeah, oh my god. I think it’s just because I wanna be in a movie so badly. I’ve wanted to be an actor probably from when I was a little kid. But I’m really small, and I’m oddly-shaped, and actors are always tall and beautiful and skinny and cis[gender]. I never really saw myself as that. When I started making music, I was like, ‘I want this to be my own version of this scene, and this is what song would be under it’; I definitely think about that when I’m writing.”

As a queer artist, do you hope to provide a safe space, or influence younger queer people to feel more comfortable in their identity?

“I hope so. I really hope so. That’d be a dream. I love seeing queer people meeting each other through my music and going to my shows. That is just a dream come true for me. Queer people are ostracised in a way that… like, it’s no coincidence that there’s a stereotype that gay people don’t date people in the same cities as them. (Laughs) It’s because we find each other on the internet; we’re just naturally more alone, and I’d love to unite people.”

Claud’s debut album will be released via Saddest Factory

Life gave Logic1000 lemons – so she made bangers