At The Drive-In’s Omar Rodríguez-López: “I can hear an incredible amount of suffering in my old songs”

Omar Rodríguez-López is what you’d describe as a mercurial musician. Alongside Cedric Bixler-Zavalad, throughout the 90’s and too little of the subsequent 00’s the guitarist made-up 50% of the magic dust sprinkled upon El Paso’s At The Drive-In. Never just another hardcore band, it was a blueprint he and his big-haired soul brother took with them to their progressive rock band The Mars Volta – an outfit in contention for the title of the most askew, interesting rock act on the planet.

When that band went on hiatus in 2012 – also the year of Omar’s mother’s passing, an event he cannot think of in terms other than ‘before’ and ‘after’ – he formed yet another band with Cedric, Antemasque, and the excellent Bosnian Rainbows (an act he felt he could helm himself alongside Le Butcherettes vocalist Teri Gender Bender).

The songs kept on coming. In 2010 he released seven albums’ worth of music, throwing himself into understanding and exploring every loop, riff and beat his life’s love had ever confounded him with. He also made waves with ATDR when they returned again from 2015-2018. Now the pioneer of sound and musical missionary talks to NME about the incoming release of his three new EPs (‘The Clouds Hill Tapes’ Parts I, II & III), US politics, and learning lessons from his past.

Hello Omar. How did these three new EPs come about?

“It’s just how this stuff always comes out really. I’ll be writing and some songs will make sense on an album or they won’t. I’m not normally very fussy all. I normally view songs in terms of clusters; do they need to exist alongside each other? These songs though – songs which comprise the arc of 24 songs I wrote years ago, on the Ipecac label, which is ran by Mike Patton from Faith No More – are the first releases in a series that starts right after the At The Drive-In reunion.”

What happened after that At The Drive-In reunion?

“That ended in Brazil, then I decided to take some time off the road for the first time in 24 years and go play some songs at the Cloud Hill Festival [in Hamburg]. I stayed out there and wrote and wrote and wrote and I think these releases are just me clearing the decks really. I essentially stopped making music when my mother died, certainly that which I made on my own. I want to make music collaboratively again, hence being in the bands, but I’d like people to hear this stuff also. It comes from a pretty pure place I think, not one easily replicated.” 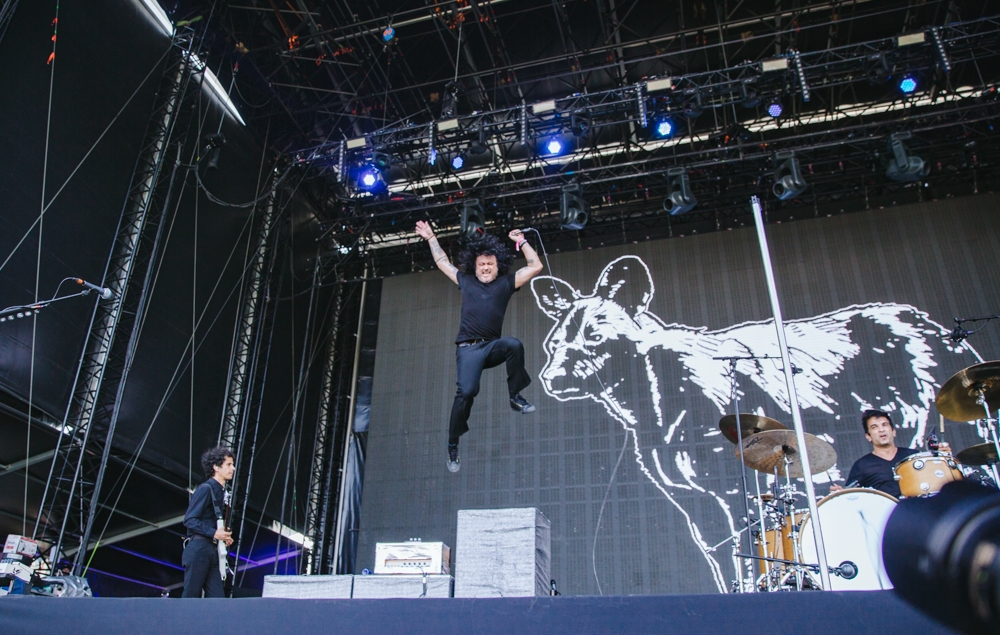 Does revisiting old songs teach you anything about how you’ve grown?

“I think so. And I love that. I love the snapshot element of it, y’know? A song is – how I see them anyway – this intimate portrait of thought and movement, or lack of movement even, and where you were at a certain time. It’s why we have music therapy, because it’s super powerful to be able to analyse a moment in time and music can transport you to those moments and hold you there. It’s like smelling someone’s perfume – it could have been 15 years, but often you’re back in the room immediately the moment the smell hits you again. Songs are such great ways to understand people – can you get inside, say, John Lennon’s head in a deeper way than trying to learn to play one of his songs? Trying to understand why they went left and not right or chose this chord and not that one. You’re solving a person’s puzzle.”

And what can you see about yourself in old songs?

“Like within a lot of music I was making around the time I wrote it, I can hear an incredible amount of suffering. I was wounded. Empty. It was worse because nobody other than those extremely close to me knew what had happened with my mother, and I got all that criticism that I was phoning in the At The Drive-In reunion. Like I’d do that! Like that tour wasn’t an attempt to write wrongs from when we couldn’t finish things properly in 2001! I get it. They expected old Omar, jumping around, being crazy. But I was going on stage and literally having people yelling at me and spitting at me and telling me to jump like a monkey – and when that phraseology is coming from white people…”

“Oh, you know… Something’s happening in that country right now that can possibly result in genuine change. At the same time, nothing that is happening is in anyway surprising. I think America’s white liberals got carried away for a while. We were supposed to be living in a post racial society by now, right? After all, we’d had a black president and all these other cool changes. Racism isn’t hiding anywhere now, and this time should be a big reminder to our white liberal friends that the struggle is long and far from over. These old white families that hold all the power? They play the long game. That’s what they did with the constitution, a document designed to protect slavery and the white way of life. But you know what? Adding some positivity here – nothing has ever exposed the dangers of the internet like this time has. The dangers of unchecked capitalism. It’s a wild ride…”

How are you dealing with life during the era of COVID-19?

“Oh, I’m holed up in Puerto Rico with my grandma. She’s 91 and she’s absolutely amazing. I was here before the pandemic, I grew up here, I was almost born here. It’s not so strange in the Latin culture for family members of differing ages to live under the same roof. She still smokes her cigarettes and asks for her rum. She still makes her coffee in the morning, she cooks, she’s very, very, very active and aware – but that in itself presents its own problems, because her head is in the body of a 91-year-old woman’s body. I’m not moaning at all actually. She reminds me so much of my mother. It’s an honour to share in all her wisdom and knowledge. We’re going to make it through this – together!”

The Clouds Hill Tapes Part I’ is out on digital platforms now. Part II arrives on July 3, before Part III and the full vinyl box-set comes on July 24. Pre-order it here.