A new South Asian-focused festival, Dialled In, has been announced for London this year, including a 1000-capacity day and night party at Uplands Business Park, E17, on Saturday 11th September.

Artists including Ahadadream, Anu, Aroop Roy, Arthi, Chippy Nonstop, Haseeb Iqbal, DEBONAIR, Nabihah Iqbal, Auntie Flo, NAINA, Yung Singh, and Nadine Artois and Mya Mehmi of Pxssy Palace are confirmed to play the main party, which will run from 12PM to 10PM, with an after session from 10.30PM onwards. Tickets are on sale now. You can see the full line-up (so far) on the flyer below.

The full programme for Dialled In runs from August to October, with the No ID club series, Chalo, and the Daytimers crew in charge of proceedings. Daytimers also recently released a collaborative compilation with Stamp the Wax in aid of COVID-19 relief in India. Waltham Forest Council is also supporting the festival.

Events will include a series of roundtables, and a mentorship scheme giving four young South Asian creatives the chance to work with established figures in the industry. A documentary will also be produced, with Shimmy Ahmed drafted to direct. Her previous work includes music videos and other visual content for the likes of FKA Twigs, Giggs and King Krule.

“When I was coming up in the music industry, I didn’t feel I had enough role models that looked like me. This whole project is for the next generation of South Asian creatives to have a different experience going forward,” said No ID boss Ahad Elley, AKA Ahadadream.

“Until now, the shared South Asian experience in creative scenes has typically been one of loneliness and isolation. Through this festival & the collectives involved, we’ve been able to witness the start of that being reversed. We’re building some of the strongest and most supportive communities any of us have ever been a part of. We’re taking control of how our identity is outwardly conveyed and making sure that no one is left to feel alone within these spaces,” added Daytimers’ Provhat Rahman 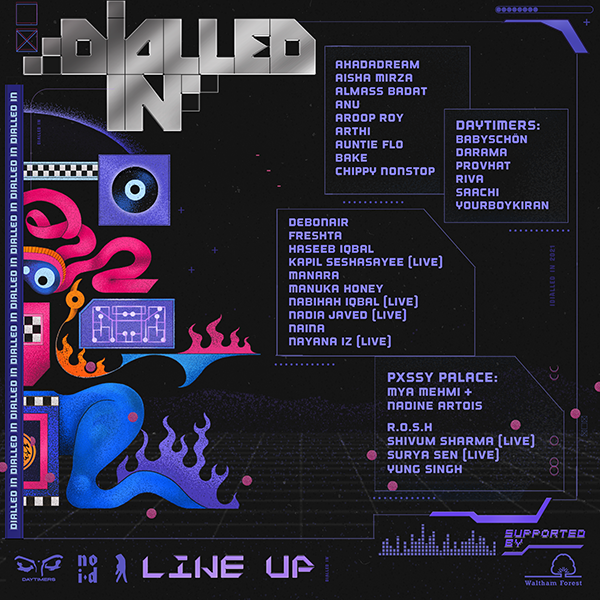