“Don’t worry, you’re early” promises Teezo Touchdown’s Instagram bio. See, the artist from Beaumont, Texas knows it’s just a matter of time before he becomes a household name. “People get scared and dismissive when they hear something that’s new or weird but after a while, it starts becoming the norm,” he tells NME today, taking a break from the studio.

Raised by a soundtrack of everything from Marvin Gaye and Prince to Kraftwerk and Judas Priest thanks to his dad’s job as a DJ and the radio constantly being on at home, Touchdown spent a while trying to find a way to blend all those different sounds. After a few years making DIY hip-hop tracks, he had his first viral moment with ‘100 Drums’ in 2019. Rapping about the gun violence in his hometown over Panic! At The Disco’s breakout emo-pop anthem ‘I Write Sins, Not Tragedies’, the track caught the attention of Chance The Rapper, while the soulful Soundcloud rap of ‘Slice’ found a fan in alt star Trippie Redd.

Since 2020, though, Touchdown has been releasing a steady stream of eclectic singles with their music videos all being shot in front of the same graffiti covered garages. There’s been the lush, guitar-driven ‘Strong Friend’, the 80’s new-wave of ‘Social Cues’ and the head-over-heels romance of ‘Technically’. Latest track ‘Mid’ is a bouncing rally cry against mediocrity, while the swaggering ‘SUCKA!’ turned the head of Tyler, The Creator.

As a result, Touchdown appears on ‘Call Me If You Get Lost’ highlight ‘RUNITUP’ and will also be supporting Tyler on his 34-date North American tour early next year, alongside Vince Staples and Kali Uchis. Before that though, he’s making his international festival debut at ALT+LDN later this month (August 30, Clapham Common) alongside Lil Yachty, The Kid LAROI and Playboi Carti.

With a love of all things dramatic (he considers theatre to be “the hardest artform”), Teezo Touchdown is a larger than life persona. His signature look includes six-inch nails throughout his hair, and he sometimes does interviews through his alter ego of Eugene Hanes.

NME spoke to Teezo Touchdown about working with Tyler, finding his own lane and leaving the stage with his name on everyone’s lips.

“Everything’s been a rollercoaster since ‘Call Me If You Get Lost’ came out. It’s been a domino effect of momentum and it’s feeling more like what I always envisioned was coming. It’s also fun because it’s the most productive I’ve been in a really long time; I’m in the studio working on this album, and the next step for me is ‘F.A.T’: festivals, album, tour.”

Speaking of playing live, you’re playing the main stage at ALT+LDN and hitting up some really big rooms with Tyler – any nerves?

“Not at all. I’m so confident and I know that what I’m doing onstage is needed, necessary and new. I feel like it’s really going to connect. I was getting overwhelmed at first but since we started rehearsals, we’ve created a really well-thought-out show with big moments, theatre, and interaction. What we have is very special. We don’t have the longest time onstage but I want to squeeze a memory in. Whoever sees my set, I want them to leave with my name on their lips.”

Are you still finding your sound?

“I’m definitely just snowballing. It’s about finding a sound that you can only get from me and right now, I’m mastering what that is. I’m dipping my toes in all these genres and acting like a piece of gum, picking up things along the way. It’s really ballsy, what I’m doing. I’m experimenting in front of this audience I have, just trying things out. You’ve got to be comfortable with it. I’m glad I’m being allowed to do that though because I see a lot of artists that get held to what their fans want them to make. Hopefully the future of music is artists being allowed to do whatever makes them happy, the same way a person would do whatever makes them feel happy.”

Genre-wise, where are you pulling from?

“I’m never chasing a sound because that would just be satire. Rather than trying to copy a sound, I look at what all this music represents: Why is rock tearing through these stadiums; how is rap tearing up the club; how is pop tearing up the charts? I’m still figuring all that out, but the energy of rock is always going to be in my music; it might not be guitar-led, but the intensity and urgency of rock will be there.” 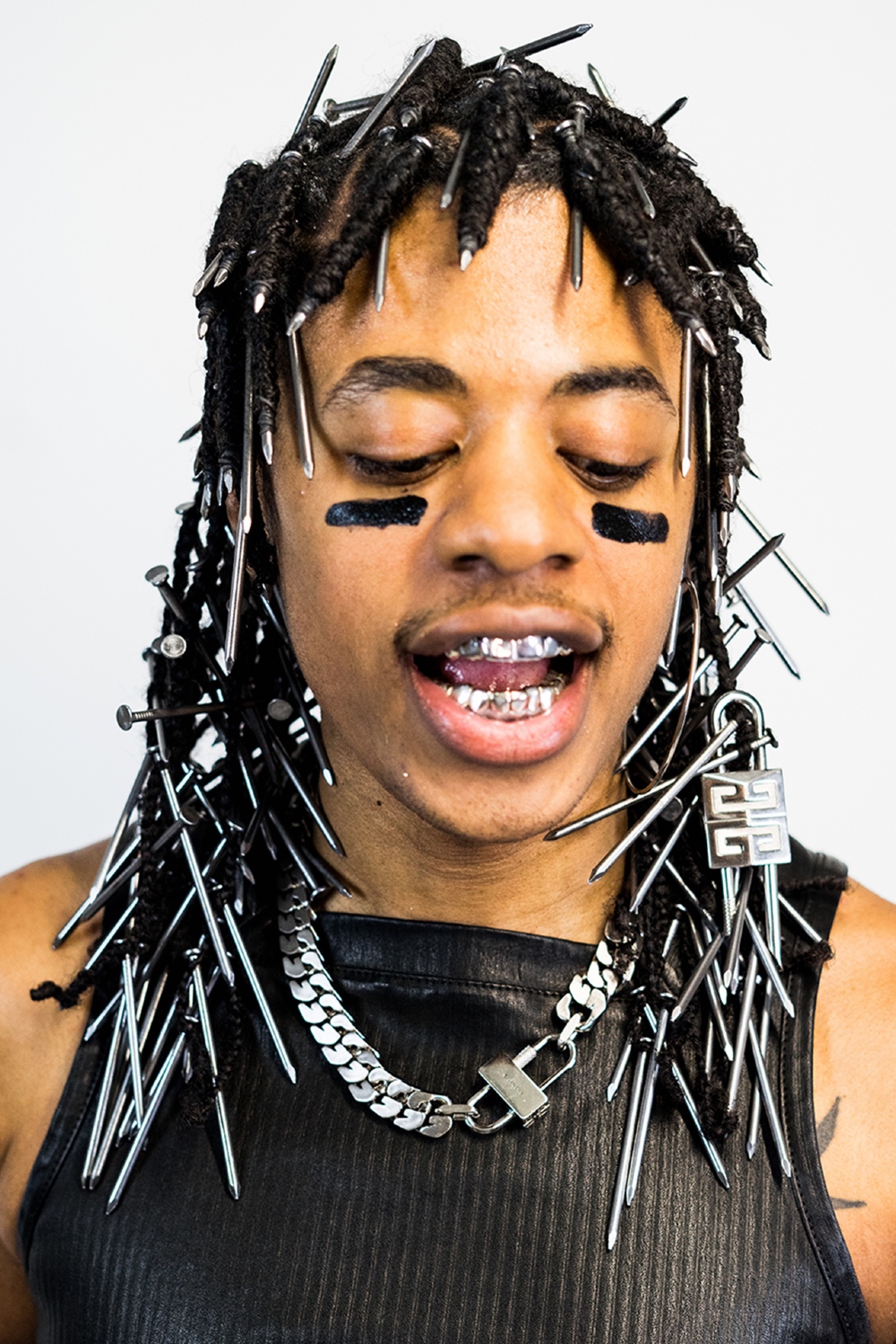 What was it like coming up in Beaumont, Texas?

“I remember in 2017 someone asked me what local scenes were popping off, and I replied with, ‘There’s nothing here, Beaumont is where dreams come to die’. It was our excuse all the time about why things weren’t happening for us, and we talked about moving to somewhere like LA to make our dreams come true.

“Now though, my success is showing people that you can achieve things if you’re from Beaumont or anywhere else. My job is to be able to break down those barriers that people are often pinned down by on how you’re supposed to sound and look if you’re from a certain place. Just because it hasn’t been done before, doesn’t mean it can’t be done.”

Did you have to deal with stereotypes while growing up?

“Definitely. People didn’t just judge me on my music or my fashion, but the type of person I was supposed to be. I feel like I’m still fighting that to this day but I’m in the middle of breaking all of that down to be the human I want to be.

“We all want to be accepted, but don’t make music because you’re fighting back against the system and you want to be different, do it because it makes you feel good.”

So you want your music to encourage unity?

“It starts with the music but hopefully it ends with people just accepting each other for who they are and not throwing expectations on them. I would love for everyone to go outside and be accepted, whether that be sonically, physically, spiritually or whatever.”

Where do you take you sound from here?

“Right now, people are asking, ‘Is Teezo going to be this hard metal sex artist or this positive pop artist?’, but really, I’m just going to be human. Being yourself is the most badass thing you can do. You have those days where you’re super positive and full of smiles, and those days where you don’t want to go outside. I’m going to take that human aspect of it all and put it into art.”

How did you and Tyler start working together?

“Someone sent him ‘SUCKA!’ saying ‘LOL look at this’, but Tyler being the artist that he is saw the underlying creativity. On the surface level, that track is crazy but if you look at the production, the banter, or the execution, there is something there.

“I think he knew that I’m now a satire artist and that this is all intentional. He told me he just went down a wormhole and he surprised me with the videos and interviews that he went and found. He really did his research. Even though we’re rockstars, the studio is this intimate place so I’ll keep how ‘RUNITUP’ came together under wraps for now.”

And what does he mean to you as an artist?

“I still remember the first time I ever saw Tyler, he was performing with Odd Future at the 2011 MTV Woodies (an annual award show aimed at college students, that ran from 2004 to 2017). It was just crazy mayhem – and I was hooked from that moment. Tyler has shown people that artists can have range. He raged with Odd Future, but over time people change and he’s a great example of that.

What do you want Teezo Touchdown to represent?

“Possibility. If you keep doing what you’re doing, then it’s going to happen as long as you don’t make excuses for yourself.

“Right now, I’m looking out my window and I can see Venice Beach, which is something I prayed for when I was making music in my dad’s closet back in the day. I asked God to show me the world; I’ve already been across the states, I’m coming to London soon and I’m doing it all off my gift of music. They say if you want to make God laugh, tell him your plans; I don’t want to put a cap on where this could go next, but it’s looking crazy.”