“Colin’s work was a big part of the DNA of this album,” Belgium-based musician Tamino says of Radiohead’s Colin Greenwood, who has worked with him on his upcoming second album, ‘Sahar’. Greenwood became a fan of Tamino after seeing him on tour several years ago, and since then, the bassist has been an integral part of Tamino’s studio and live band.
“I’ve learned a lot from him over the years now,” he adds of Greenwood, full of admiration for a musician he’s listened to since his childhood. “I wouldn’t say he’s like the guy giving you loads of advice verbally, but he does that anyway just by being himself – like with his passion for music. He’s had an amazing career with years on the road and in the studio. You think by a certain point you you’d seen it all, you’d be less excited by stuff. But he’s the most excited musician in my band.”

He recalls his time in the studio with Greenwood fondly. “Colin was writing his basslines in one room with headphones on and really into it. He was totally in the zone and then a few hours later, when he had something he really wanted to show us, he would come into the main room, plug in and play us the lines he’d come up with. They were always stunning.”

It’s perhaps no wonder Tamino found a fan in Greenwood. With his richly textured, experimental music and Thom Yorke-like falsetto, his music earned early comparisons to Radiohead following the release of his debut album, ‘Amir’. While much of that leaned sonically towards the sparse, ‘Kid A’ era of Radiohead, its lyrical content was strikingly different and explored complex issues of identity and diaspora.

Tamino was born in Belgium, studied music in Amsterdam and has a rich Egyptian and Lebanese heritage from his parents. His grandfather, Muharram Fouad, was one of Cairo’s most famous musicians and was known as ‘The Sound of the Nile’. Tamino plays his grandfather’s resonator on his latest and the Middle Eastern influences of his roots once again dominate on songs that combine Arabic folk with experimental indie and soaring orchestration.

“I don’t speak Arabic, but I just feel that the music has been the thing I’ve most understood about my roots,” Tamino explains from his apartment – that doubles as a home studio – in Antwerp. “It’s just a style that I’ve always just sort of naturally understood and felt comfortable with. The oud [a lute-like instrument with Arabic origins] is once again a big inspiration for this album too.”

Tamino says that just over two years ago, he started writing album two in the same tiny Antwerp apartment he’s calling from today. After many years touring incessantly, Tamino says he welcomed lockdown as a chance to hide himself away from the world and write for a while. “I found it very hard to write while on tour because I really need to be alone to be creative,” Tamino says quietly, admitting that he’s a self-proclaimed recluse.

He says he finds it hard to be among a lot of people at once. “To write lyrics, I have to do that in isolation. As an introvert, you realise your biggest strength is also your biggest weakness in the sense that I can spend a lot of time on my own and enjoy that and flourish creatively but then when you’re on tour, doing promo, you need to be able to function with lots of people and I can sometimes struggle with that. It’s not my safe space, being an introvert in a world that’s designed for extroverts.”

He felt this keenly he says after being thrown into the spotlight after he won a national radio contest in Belgium. His music went viral and garnered millions of streams plus a legion of new fans – one of whom was Lana Del Rey. How did he cope with this, as someone who struggles being in the spotlight? “I don’t feel you’re in a position to complain as an artist. I think artists like to meet up with other and complain about everything,” he smiles. “But musicians feel like it’s safe to talk about the stuff that’s difficult with one another because I guess for the outside word, it’s like ‘dude, you’ve been given this much, this opportunity, be fucking grateful, you know?”

When it comes to these tougher moments though – be it dealing with attention or having creative doubts – Tamino says Greenwood once again helped him here. “He’s still so passionate and it’s in little times like these where I have to remind myself when I’m maybe not appreciating everything as much as I should be appreciating it, then I look at him and I’m like ‘Okay, I have to enjoy this moment.’ I have to be grateful for us playing music together and us being able to bring to a crowd…it’s a truly special thing to be able to do.”

His latest album is a mediation on his introverted self. There are many songs reflecting on the passing of time in isolation, like his latest, sweeping single ‘You Don’t Own Me’. It’s inspired by ‘Man’s Search For Meaning’, by philosopher Viktor E. Frankl and explores how we learn more about ourselves over time. Elsewhere, there’s songs about confusion and uncertainty, like on the lush ‘Cinnamon’ and ones about love being a grounding force in ‘Only Our Love’, a song about the positivity that can come from giving yourself over to another completely. 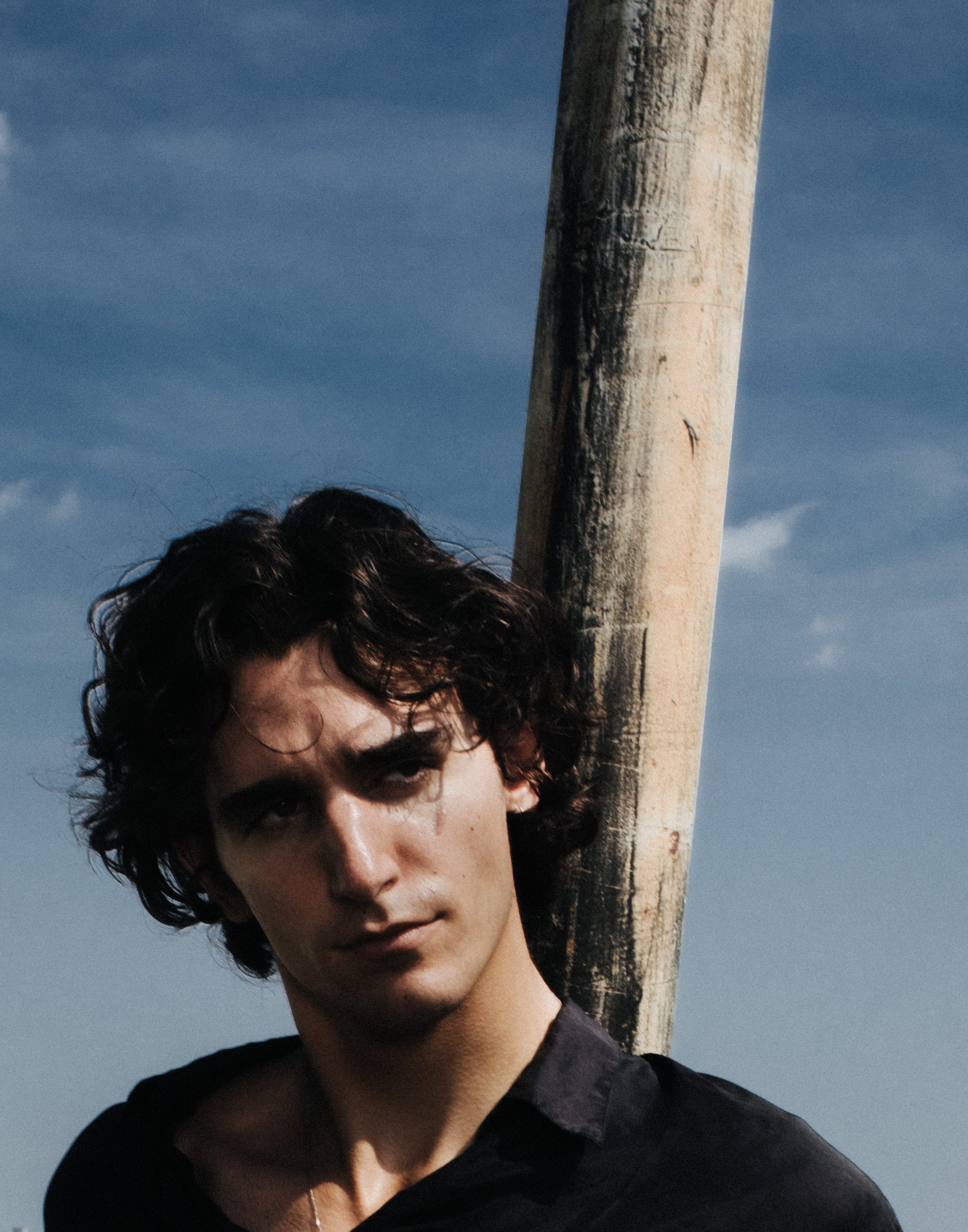 “One thing I felt the songs had in common here was a sort of reflective state, like I feel it’s more of a reflective album,” he agrees. “The title ‘Sahar’ means ‘just before dawn’ and for me it conjures up this image of being in a sort of in-between realm, like between night and day, a storm and the calm that follows. The album sort of feels like an aftermath of something where you’re reflecting on what happened even though you still don’t really know what precisely happened. My life has drastically changed in such a short amount of time, which has felt like a bit of a storm at times.”

Despite feeling more confident going into making album two than his debut, he says not a single day was the same for him when it comes to writing and he found little common ground between writing his latest album with his last. “Songwriting still surprises me”, Tamino laughs, explaining that the process of writing constantly changes for him. “The really beautiful thing about songwriting is that you really don’t know where it comes from and sometimes you can spend three hours at the piano or at the guitar and nothing comes.

Other times, it’s only ten minutes and you have a new song that you love. It’s a mystery.”
The lyrics on his latest are far more vulnerable and open than his first. “Hold onto my words and I’ll come place them on your tongue” he sings Jeff Buckley-like on the romantic ‘Cinnamon’, revealing more about a close relationship. “I feel like I have matured a lot in the lyrics department,” he says, adding that he hopes people will be able to relate to his lyrics more now too. “I guess a lot of the maturing is in the fact that I always appreciate a grey zone where an audience is able to claim and [compare] the song to their own experiences and their own lives…it’s really true that when you release an album or song, it’s not yours any more from that moment on and I feel…more content with that now, although still a little nervous,” he admits.

He’s also a bit nervous about touring again too, after so long away. “Well, I had forgotten how to play everything recently”, he laughs about not having played live since lockdown. “It was the longest I hadn’t been on stage since I was like 14. I don’t think I’d gone a month without performing before so two years felt like a lot.” He says some recent showcases helped him realise how lucky he was to be touring again. “In the beginning, I didn’t miss touring at all in lockdown,” he smiles. “But then I really started missing it.” He hopes that Greenwood will be able to join him on tour next year too. “In 2023 there are a lot of dates he can join us on for sure…we’re still working it all out yet.”

Before then, he’s already looking to the future saying he’d love to follow in some of his heroes footsteps and compose a soundtrack next. “Like Nick Cave and Warren Ellis, they’re making beautiful music for films. That’s something I definitely find appealing and it’s a dream of mine to do this. It makes me nervous as it’s a new thing but then what frightens me is always worth exploring creatively,” he smiles, “because that’s where you learn the most about yourself.”