Inhaler: “You get into a band so you don’t have to grow up”

Nine years ago, a couple of teenage boys in Dublin wrote a song about a breakup. It was about that lingering feeling of trying to shake someone off, even if it feels like they’re stuck in your head forever. It was called ‘It Won’t Always Be Like This’ and they really believed what they said – except the band couldn’t quite anticipate that the song would take on a different meaning as the coronavirus pandemic reared its ugly head. Naturally, Inhaler leant into the eerie serendipity of it all: it soon became an anthem for uncertain times, and is now the name of their debut album.

“It took on this whole new meaning in lockdown, the feeling of trying to be hopeful and get through it all,” says frontman Eli Hewson (son of Paul David Hewson, or as the rest of the world knows him, another Irish rockstar called Bono) of the track that they just can’t quit. “It’s six words to hang on to,” he adds, sitting patiently next to his bandmate, bassist Robert Keating, with NME in London after almost five years of songwriting, gigging, recording and, well, self-isolating behind the scenes, waiting for the world to be ready to hear Inhaler in full bloom.

Hewson and Keating are joined in the band by Josh Jenkinson on guitar and Ryan McMahon on drums. After convincing Jenkinson to leave another band to play guitar for them they’ve been a steady fixture for the last few years: a smattering of singles from 2017 was followed by a debut EP at the end of 2019. It should have led quite quickly into the debut album at the start of last year, but you know what happened next.

The finished product appears to have two distinct halves; the first is a portrait of the artists as young men – full of volatile, nervous energy that spoke to a fanbase ready to latch onto a hopeful artist for a new generation – and the other about life in their 20s: a more mature, measured band, forced to take stock of the changing world around them. “You get into a band so you don’t have to grow up,” Hewson says of Inhaler’s decision to quit school at 16 and throw themselves into music. “When we were teenagers we’d write about the girl you fancy or the house party you went to, but when lockdown hit it was like, ‘If you’re ever going to write about the world you’re going to do it now.’ We wanted to make a record about that weird area between being an adult and a teenager, trying to find yourself and getting lost and finding yourself again, getting lost again, going for a pint, wondering why the world exists.”

That sense of powerless confusion is potent on the haunting ‘What A Strange Time to Be Alive’, one of five tracks on the album born during the pandemic over countless Zoom writing sessions. “We wrote music we couldn’t play together, that didn’t feel like it could be played at an Inhaler show,” says Keating.

Inhaler went from being a live band to a studio one – there was no adrenaline, no tours, just the four boys having to trust their instincts to make something that could go the distance. Thankfully, it paid off: there’s the robust, sauntering ‘Slide Out The Window’, a thinly-veiled Thin Lizzy tribute with ‘In My Sleep’, and the playful and somehow poignant album standout ‘Who’s Your Money On’ – on which you could easily mistake Hewson’s authoritative, dynamic vocals for his father’s.

This wouldn’t be the first or last time someone reminds Hewson of his roots. In fact he told NME, jokingly, back in 2019 that he thinks his dad has “had his moment”. Today they poke fun at any mention of U2 – what do they think about the fact that Noel Gallagher once praised Inhaler as a cross between U2 and Echo and the Bunnymen? “Baffling.” But jokes aside, Inhaler are always focused on proving their worth. “It drives us to be better,” Hewson had said of his dad’s shadow. “If we were shite, you wouldn’t bother talking to us.” He’s right, and has since nodded to that same determination on the album’s title track with confident lyrics: “I wanna be the best at what I do / What about you?” 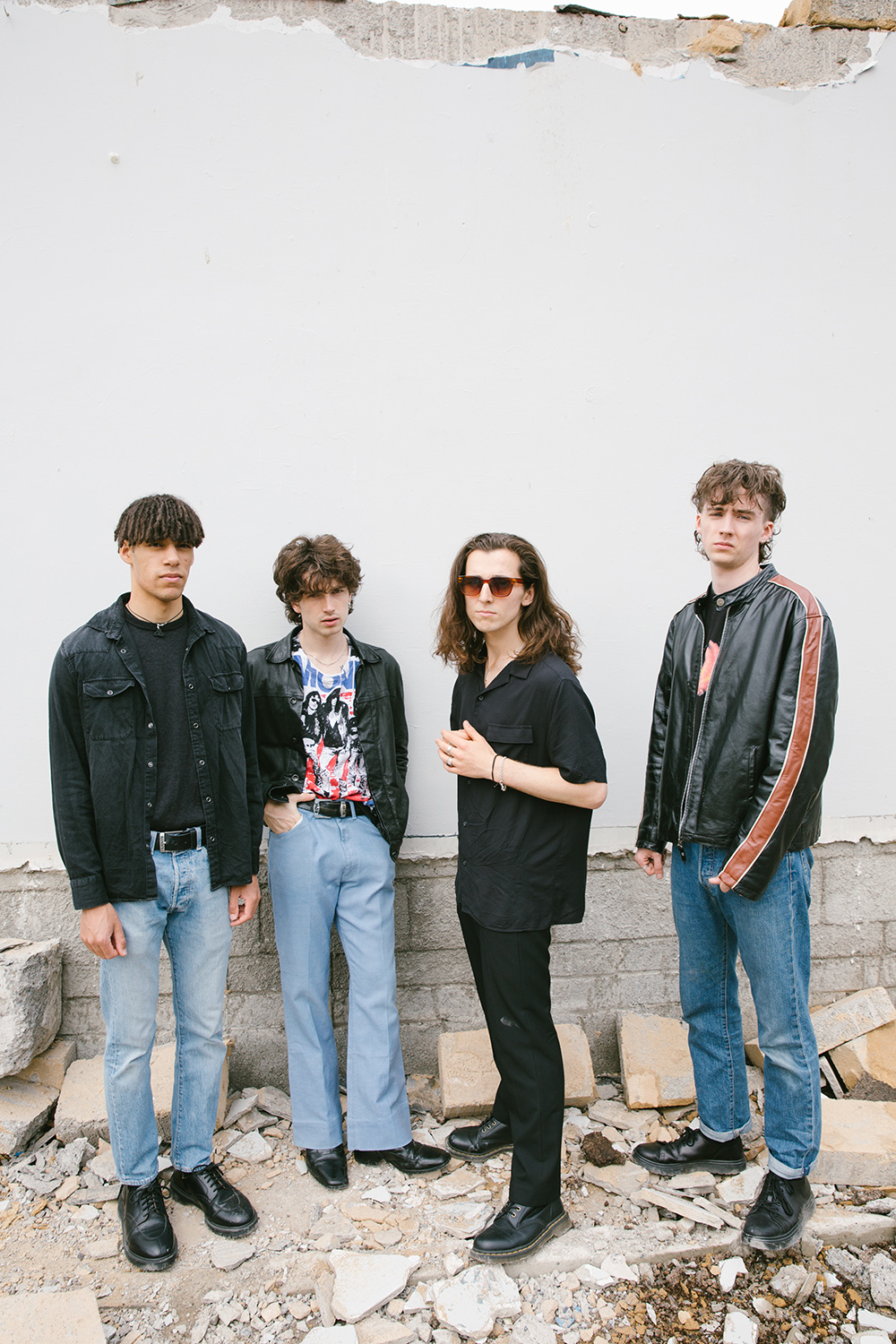 ‘It Won’t Always Like This’ offers an eclectic range of daring songs – appropriate for a young, rough and ready band still figuring themselves out. “Usually you get people’s visual reactions – if they go to the bar, you know you should make something more exciting,” explains Hewson of Inhaler’s usual play-it-live-and-see-what-sticks modus operandi. “You don’t have that connection with the fans in Instagram comments or Spotify streams, so it was more of a shot in the dark.” The band are grateful for their devoted fans – but also happy to have had a bit of peace. “It was nice to have that time away from them because it was just about what the four of us wanted rather than the fans,” Keating adds.

What Inhaler want is to be free, in every sense of the word. They don’t want to be bound by genre – there was a time where they could have been a metal band (“We played ‘Smells Like Teen Spirit’ and butchered it – that definitely scared us away from doing metal!”), and are now looking ahead to explore “dancier, more Talking Heads” melodies in their new mid-tempo material on this album – but also on the second and third, for which they’ve already written plenty. They say they want to steer clear of cookie-cutter music “that doesn’t make you feel anything”, and they love guitar music more than anything else: “You get a jolt through your system when you can hear them hitting a string,” Hewson says. “I think people want that physicality.”

And they want it more than anyone, that freedom in a physical sense – since what would have been their first Glastonbury got cancelled (“We stopped trying to feel things after that”) Inhaler have been holding out for a live show like nothing else. They certainly won’t be lacking options, if their trajectory to date is anything to go by: Noel Gallagher (major inspiration for these young guitar heroes, and also conveniently close friends with Bono) took the band under his wing for his 2019 Heaton Park shows, as did Blossoms on their US tour that same year. “We used to sneak off from school and listen to their stuff and just thought it was deadly,” Hewson says. The Stockport band’s influence is unmistakable on the album, most clearly on the dreamy yet biting pop of ‘My King Will Be Kind’. “They showed us the ropes,” says Keating. “It’s very much like a big brother situation now.”

Their admiration for Blossoms and, naturally, Oasis, aligns with Inhaler’s ambition to break free from where they came from – as all roads, for now at least, seem to lead back to Manchester. “It’s not to say we don’t love the music coming out of Dublin, but we were always attracted to The Stone Roses, Joy Division… that kind of ‘80s synth thing really inspired us early on,” Hewson says. Are they confident about the endurance of straightforward rock and roll in 2021? “Oasis’ ‘What’s The Story Morning Glory’ was still in the charts the other day,” Keating points out. “People still have a hunger for that kind of thing, and there are bands like Fontaines DC, Girl Band, Blossoms, Sam Fender, who are all punching through the walls for bands like us.”

Once they find an opening, good luck trying to contain Inhaler for much longer. “We were lucky we could hold off during the pandemic and focus on the future,” Hewson says, recognising the gift of patience, and hope, at a time like this. “We want to make sure we’re hitting the ground running with our feet, not our face.” What can the world expect when, finally, things are no longer like this and Inhaler’s first album can finally run free? “A bit of defiance,” the frontman confidently says. “Joy is the antidote to this whole experience.”

bugAboo: “We want to become somebody else’s role model someday, and inspire them to reach for their dreams”