Although first released in 2019 as part of his ‘80%’ EP, Alex Gough didn’t expect ‘Dear SJ’ to give him his breakthrough moment over a year later. That very track was the first piece of music heard during BBC’s lockdown sensation and adaptation of Sally Rooney’s Normal People, and would later be joined with other artists from his homeland, including Orla Gartland, SOAK and more.

“It was amazing that they used so many Irish artists to tell an Irish story. I was so honoured to be one of those artists, along with a lot of my peers,” Gough tells NME from his home in Waterford, taking a break from college assignments. Tackling social media anxiety, a lack of empathy and generally feeling a bit overwhelmed, the sparse hip-hop track left a lasting impression as the world went into lockdown. But while we were getting tangled up in the complex romance of Connell and Marianne, Gough was writing, recording and producing the entirety of 2020’s ‘Forever Classic’ mixtape from his bedroom. It took him just 6 weeks and sounds like Gough hasn’t even considered the idea of genre; it’s all the more thrilling for it.

Standout performances at virtual festivals including Eurosonic Noorderslag in January and March’s SXSW followed, with the drummer/rapper delivering emotional, urgent verses from behind his chosen pieces of kit. Missed it? Well, the recently released ‘Bonus Features (Live At The Clinic)’ sees Gough and his band reimagine highlights from his back catalogue as they lean into the more experimental, jazzier side of their influences. When Gough tells us his next single could be a house-inspired rager, we’re not surprised. In fact, we’re bloody thrilled by the idea.

We spoke to the Irish rapper/drummer/producer about discovering the confidence to use his own accent, his plan to release nothing but bangers in 2021 and why his generation refuses to box itself in.

Where did the idea for ‘Forever Classic’ come from?

“I was meant to be on the road last year. I figured if I can’t tour because of COVID-19, I may as well put everything into a project. I was reaching a point where I really wanted to step up artistically anyway. I’d always romanticised the idea of creating a musical world, like Kendrick Lamar’s ‘To Pimp A Butterfly’ or Frank Ocean’s ‘Blonde’ and ‘Channel Orange’. I really wanted ‘Forever Classic’ to feel like this retro 90’s mixtape. It just became like a way for me to put all my artistic ambition and inspiration into a world that I couldn’t necessarily go out and explore myself.”

What did you learn from making it?

“I’m an ambitious person so one thing I had to learn in the last year was to be patient. I’m awful at being like ‘when the time is right and if I keep working, it’s gonna happen’ because I want it now. When I was very young, I decided that music is what I wanted to do. I’m a firm believer that if you have a Plan B, Plan A is destined to fail. I want this to succeed. This is my dream and I will take no other options.”

Is it important that you’re seen as more than just a drummer?

“I genuinely think it might be the most important thing to me. I started playing drums when I was six years old and growing up, I wanted to be a drummer in a band. My computer screensaver was the view of a crowd from the drum kit but I love artists like Pharrell Williams. Did you know he just opened a hotel? He does absolutely everything and It’s something that I really appreciate about him. I have so many interests and inspirations, I don’t ever want to be in a box of preconceived ideas. I don’t want to just be a rapper. I don’t want to just be a drummer, or a producer. I want there to be options for me to do whatever I want.” 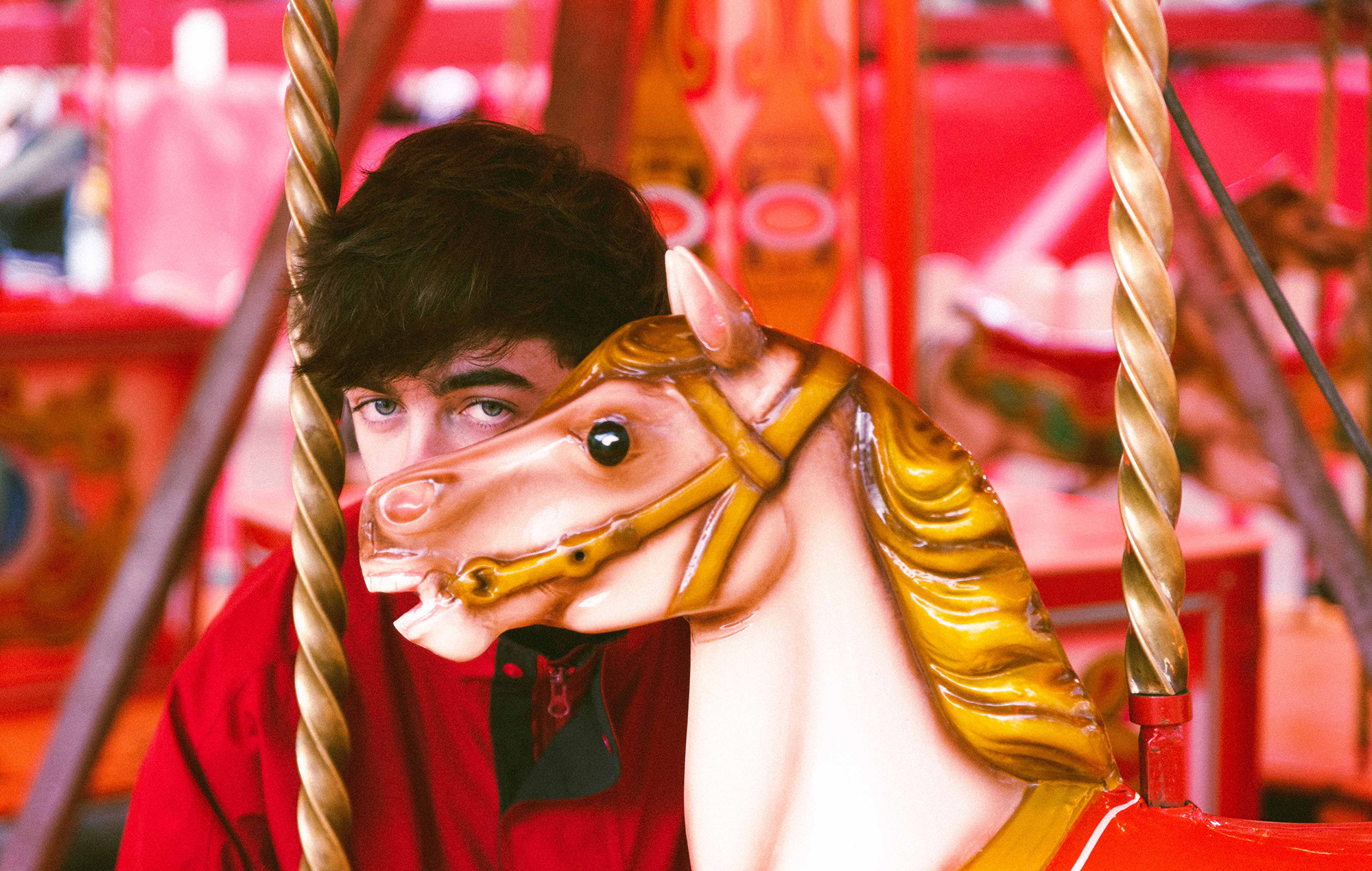 How would you describe the music you make?

“It’s a blend of hip hop from New York, trap from Atlanta, drill, grime, pop, house and techno as well as jazz, drum & bass and those more experimental styles of instrumental music. When you mash all those together, you don’t hear the individual pieces but I call it hip hop jazz. It’s experimental and hopefully pushes boundaries.”

Did it take a long time for you to find a style that made sense for you?

“So long. I have a song that I’m working on at the moment and it’s this Jersey house track. I don’t know how I’m going to rap and play drums on it at the same time, but it happens all the time. One day I’ll want to make a Brockhampton-inspired trap song, the next it’ll be a jazz track because I’ve listened to Yussef Kamaal. It’s a matter of finding a way I can do each side of the spectrum. It also gives me my individuality because if I’m as much myself as possible, then how could I be like anybody else?”

You started out releasing instrumental tracks, did it take a while for you to feel comfortable using your voice?

“There’s a massive thing in Irish music where people put on an English or American accent, because that’s what they hear all the time on the radio. If all you see is successful music coming from the UK or America, naturally you’re going to copy that. When I first started out, I had this American twang because there weren’t many Irish rappers using their own accents. Now though, there’s people like Kojaque, Rejjie Snow, Strange Boy, Hazy Haze, Denise Chaila and more who are 100% raw, no gimmicks and proud to be Irish. That paved the way for other artists. It’s tough in a small country like Ireland to stand up and do something that is clearly influenced by elsewhere, but you’re doing it your own way. Now though, there’s this pool of crazy talented people from Ireland being welcomed with open arms, which is nice.

And what was the moment you knew it was the right decision?

“The night before I released ‘Breakfast’, which is my first proper single with my voice on it, I was so terrified I wanted to pull it. A week later, it had 100,000 plays which was ridiculous. Everybody needs a healthy injection of good self-esteem every once in a while. That was the moment when I realised ‘maybe being myself is what I should do’. I still doubt myself all the time though. Even after releasing ‘Forever Classic’, I sometimes worry that my voice isn’t good enough but it’s just human nature. It’s a matter of pushing through that, telling that voice in the back of your head ‘no’, and moving forward.”

Do you want to inspire other Irish artists to be confident using their voice?

“To influence anybody would be a huge win for me. Five years ago, I was this 16-year-old kid sitting in my bedroom, dreaming about being an artist and releasing music. There were people out there like Kojaque who made me feel like I could do it. So if I can make somebody else feel like they can do it, I owe it to my 16 year old self to do that. My main goal is that my music will make people feel how music makes me feel, which is liberated, free and not alone.”

What’s next for you?

“I’m going to hold off on conceptual projects for a little while. I’m just going to release singles for the rest of the year to get some different styles out of my system. I’ve got a freestyle hip-hop song and there’s even some records with me singing, which isn’t something I’ve ever done before. The more positive confidence boosts I get back from people when I put my music out, the further I go and the happier I feel in myself going forward. I’m sure I’ll slowly work away on a project in the background but it’s all about bangers for the next while.”

You’re a drummer/rapper/producer who makes genreless music. Where does that sense of freedom come from?

“Culture is so accessible these days that it would be strange for people not to engage in everything – you don’t have to struggle to make a pop song to succeed and you don’t need a label either. If you produce for yourself then what’s to stop you from producing for other people? Billie Eilish uploaded ‘Ocean Eyes’ to Soundcloud in 2015 and she’s the biggest artist in the world. The barriers to entry are significantly less than they once were so why wouldn’t we get involved in it all?”

The Coral on their epic new album: “‘Coral Island’ is the world on our own terms”